(A note from Pecan Street:  The answer to the question in the headline is “no.”  For a more detailed discussion of how our report has been reported, please see this post on Forbes.com.)

The research is the first of its kind to evaluate the energy production of solar panels oriented in different directions. Pecan Street analyzed 50 homes in the Austin, Texas area. Some had only south-facing panels, others had west-facing panels, and some had both.

When the data was normalized for a 5.5-kilowatt system, the panels turned to the west generated nearly 50 percent more electricity during peak demand hours than did their southern-facing counterparts. 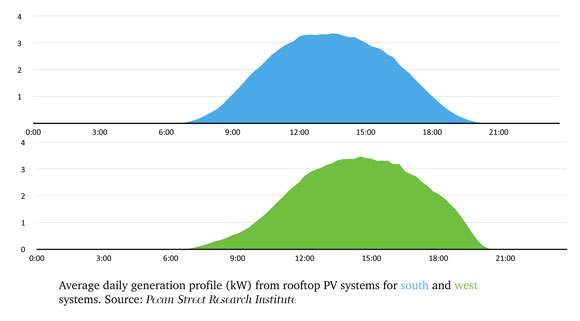 Homes with west-facing systems also produced slightly more electricity, with those panels producing 37 percent of total daily electricity use, compared to 35 percent for the south-facing panels.

During times of peak demand, which is defined as 3 p.m. to 7 p.m. in Texas’s ERCOT territory, 84 percent of electricity in west-facing systems was used in the home.

The information could help inform utility rebate programs for rooftop solar panels and demand response programs. Most homes currently have south-facing panels. For the research, Pecan Street paid a premium to participants to induce them to turn their panels westward. If more utilities were to move to dynamic pricing models, where power cost more during days of high peak demand, west-facing panels could potentially be more attractive to certain households with high peak loads.

The next round of research will also include information about the pitch of the roof. Panels on flat roofs tend to have higher rates of electricity generation, but most homes in the U.S. have pitched roofs, as did all of the participants in the first study. Pecan Street will also look beyond Austin in the next stage of the study. McCracken said there are plans to include homes in Colorado, Dallas and potentially California.